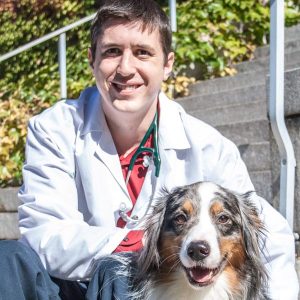 Years in Practice: 5
Education: University of California at Davis School of Veterinary Medicine

Dr. Jimison has worked at many positions within veterinary medicine. Dr. Jimison’s career began here at Muir Oaks Veterinary Hospital, where he started as a part-time kennel attendant in 2001. He worked his way up to a veterinary assistant, where he worked part-time and during the summers while earning his B.S. in Animal Science from the University of California, Davis. He attended veterinary school at UC Davis School of Veterinary Medicine, graduating with honors in 2014. After veterinary school, he moved to Los Angeles for a veterinary internship at VCA, West Los Angeles Animal Hospital.

In 2015 Dr. Jimison moved across the country to Boston to work as a general practitioner at Angell Animal Medical Center, a branch of the Massachusetts Society for the Prevention of Cruelty to Animals. As a general practitioner, he has a passion for all aspects of preventative care, including developing specifically tailored vaccine and parasite prevention strategies for each pet. He also has a special interest in the management of endocrine and gastrointestinal diseases. In his free time, Dr. Jimison will often be found catching up on the latest entertainment and movies. He also enjoys snowboarding, hiking, backpacking, and spending time outdoors with his dogs Ty and Poppy. He also has a tabby named Sharkbait and a turtle named Louie.